With just under three weeks remaining until the opening event of the 2017 championship, SWR’s first in endurance competition, team and driver have been ramping-up their testing mileage and last week’s outing at Silverstone’s National Circuit was another major step forward.

Durham teenager Fagg, who moves into the GT4 European Series Northern Cup with SWR after graduating from the Ginetta Junior Championship, gained his first experience of dry-weather running at the wheel of the Nissan and produced very good pace on the slick Pirelli tyres.

Sean Walkinshaw, the SWR team owner, ventured out onto track in the Nissan GT4 initially to conduct some initial set-up work. After a few laps, the newly confirmed Super GT competitor handed the Nissan over to Fagg who then remained behind the wheel for the rest of the day.

“We were really happy with Friday’s test and Charlie’s lap times, especially considering it was his first time on slicks in the GT4 car”, reflected Walkinshaw, “It was a very encouraging day and great for the whole team to be able to get some important dry data. All of the mileage up to now has been in the damp or wet, so we’ve made some good steps and improvements with our dry set-up now too.”

From 17-year-old Fagg’s perspective, he was particularly happy with the consistency of pace achieved throughout the test day and also the high standards of preparation for which SWR has become renowned.

“I’m delighted with how the test went”, he said, “When we arrived at the track the car was spotless, the SWR boys do a phenomenal job putting together the 370Z. Just seeing the car next to the team truck made me very excited for the season, the team is very professional. The car was fitted with the new Paddle Shift gearbox and pedal box which ran superbly and I was comfortable with it straight away. As soon as I drove the Nissan it had a fantastic amount of grip and the balance was spot on. After my first few laps in the car I was ready to push on as the level of grip available from the car gave me the confidence to do so.”

Fagg added: “After becoming more and more comfortable we started to develop some fast lap times, and very consistent ones too which is vital for GT racing. Overall the car ran very well and showed great pace throughout the day. I’m very much looking forward to the next test and to then getting on track in Misano for the first round!”

Fagg’s maiden season in endurance competition with SWR will begin over the weekend 1st/2nd april at Misano in Italy with the championship then travelling to the UK for the partnership’s ‘home’ event at Brands Hatch in Kent on 6th/7th may.

Visits to the Red Bull Ring in Austria and Slovakia Ring in Slovakia follow in june and July, before the GT4 European Series Northern Cup enters its final third – Zandvoort in The Netherlands hosting the penultimate race meeting on 19th/20th august with the series finale taking place on 16th/17th september at the Nurburgring in Germany.

Hitech GP's Kush Maini has an extended lead in the 2020 BRDC British F3 Championship, after taking a fighting second win of the year in... 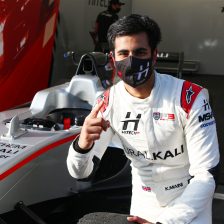 END_OF_DOCUMENT_TOKEN_TO_BE_REPLACED

The 2020 season of Nicholas Risitano began with the podium conquered in the EuroNASCAR 2 Division on his hometrack at Vallelunga. The Rome native driver grabbed the third place in...

END_OF_DOCUMENT_TOKEN_TO_BE_REPLACED

Max Lanza starts the weekend with a double Top10

END_OF_DOCUMENT_TOKEN_TO_BE_REPLACED

KTM X-BOW GTX Concept of Reiter Engineering took the Race 1 victory at the Red Bull Ring as Stefan Rosina and Patric Niederhauser benefitted from a safety-car...

END_OF_DOCUMENT_TOKEN_TO_BE_REPLACED

Nico Müller has consolidated his championship lead. The Swiss dominated the first race at the Nürburgring with his Audi RS 5 DTM. With a margin of...

END_OF_DOCUMENT_TOKEN_TO_BE_REPLACED

Frederik Vesti handed Prema Racing its seventh win of the 2020 FIA Formula 3 season at Mugello. At the same track that crowned him Formula...

END_OF_DOCUMENT_TOKEN_TO_BE_REPLACED

Hamda Al Qubaisi and Abu Dhabi Racing are set for the third round of the Italian Formula 4 Championship powered by Abarth hosted by the Red Bull...

END_OF_DOCUMENT_TOKEN_TO_BE_REPLACED

Risitano and Solaris Motorsport togheter in the EuroNASCAR 2

Nicholas Risitano will drive the #12 Camaro fielded by Solaris Motorsport in the 2020 EuroNASCAR 2 season. The Rome native driver will share the Camaro with Francesco Sini, at his...