The sixth round (5/6 August) of the 2017 BRDC British Formula 3 Championship came to an action-packed conclusion on Sunday at Brands Hatch, with championship leader Enaam Ahmed claiming his 10th victory of the season in race three, and doing so in lights-to-flag fashion. Earlier in the day, Double R Racing’s Krishnaraaj Mahadik secured his maiden success in the UK’s premier single-seater category as he benefited from on the road victor Toby Sowery’s exclusion to take the race two win on his return to the championship.

Krishnaraaj Mahadik claimed his maiden BRDC British Formula 3 victory in race two of the weekend on the magnificent full Brands Hatch Grand Prix circuit, after he finished second on track but was promoted to the win after on the road victor Toby Sowery failed eligibility in post-race scrutineering. The Carlin duo of James Pull and Enaam Ahmed finished second and third respectively.

After finishing eighth in race one of the weekend, Mahadik, who returned to BRDC British F3 this weekend, started on pole and he duly led into Paddock Hill Bend as the lights went out. Chris Dittmann Racing’s Jeremy Wahome made a quick start from the second row and cut back down the inside of second placed starter Dane Nicolai Kjaergaard into Druids. Contact was made between the pair though and that caused a concertina effect, with Douglas Motorsport’s Jordan Cane being unfortunate to get caught up in the accident.

That afforded the opportunity for those starting further back to move up the order and Sowery took full advantage by gaining three places to run third on the opening lap. The Carlin duo of James Pull and Enaam Ahmed inhabited fourth and fifth whilst Ben Hingeley made a storming start in his Fortec Motorsports machine, having made up eight places to run sixth. Other fast starters including Omar Ismail, moving up five places to seventh and Cameron Das and Guilherme Samaia both gaining six places to run ninth and 10th respectively.

A train began to form behind Kenyan Wahome, enabling Mahadik to open up a small advantage at the front, but Sowery soon broke the status quo as he made a brave move on the Chris Dittmann Racing man at Sheene. That released the multiple British F3 race-winner who soon began setting a number of fastest laps to close the gap to Mahadik ahead.

Cameron Das dropped down the order after being forced to pit with a puncture, whilst on track, his Carlin team-mate James Pull attempted to pass Wahome around the outside at Paddock Hill. Pull ran wide however, flirting with the gravel, and Ben Hingeley took advantage to move up yet another position to fourth.

Sowery meanwhile had closed the gap to the leader Mahadik and after sizing him up, made a successful switchback through Paddock Hill and slid up the inside of the Indian at Druids to seize the lead. As the cars behind came through the same corner, Ben Hingeley made his move for the podium positions around the outside of Wahome, but the Brit and the Kenyan came to blows, with Hingeley ending up in the gravel and out of the race. Wahome continued on but dropped down the order to fifth, with Pull and Ahmed promoted to third and fourth respectively. After the race, Wahome was excluded from the results for driving in a manner incompatible with general safety owing to the incident.

Further round the lap, Chase Owen made contact with the rear of Guilherme Samaia, sending the Brazilian off into the gravel at Stirlings and thus the Safety Car was called for. After a brief period recovering the two stranded Tatuus-Cosworth cars, the Safety Car peeled back into the pitlane and Sowery made a brilliant restart, gapping the field behind as he turned into Paddock Hill. Omar Ismail meanwhile passed team-mate Wahome to move up to fifth whilst Pull pressured Mahadik for second.

In the closing stages, Sowery stretched his lead to over five seconds whilst Mahadik fended off Pull well and as the chequered flag came out after 14 laps, the order remained unchanged.

In post-race scrutineering, Toby Sowery’s car failed the eligibility criteria and thus was excluded from the race results. The Clerk of the Course was satisfied that this was due to an error and not an attempt to gain an unfair advantage. That meant that Mahadik, on his return to the UK’s premier single-seater championship, took his maiden win in British F3, with Pull second and Ahmed third.

Mahadik said: “It’s amazing! It feels so good to be back and I’m so happy with the result. I never thought I would get a win as I’ve been struggling for pace all weekend. We didn’t have a good qualifying so I wanted to keep my head down and get in the top-eight in race one. I got a chance to start on the front-row in race two and it was hard but it was really good. You have to be on your limit the whole time around a track like Brands Hatch GP and one mistake can ruin your race, but it feels great to be back!”

Ahmed lined up on pole position for the third and final race of the weekend on the full Grand Prix circuit, by virtue of setting the fastest lap from across the first two encounters of the weekend, and he was joined on the front-row by Carlin team-mate Cameron Das. As the lights went out, Das made a strong start but Ahmed was able to hold him off as the field turned into Paddock Hill. Toby Sowery was slow away in fourth and he dropped to near the back of the field, with James Pull jumping both Sowery and third placed starter Callan O’Keeffe.

After lap two, Ahmed continued to lead from Das and Pull but further back, Douglas Motorsport’s Jordan Cane tried to pass Jamie Chadwick for 10th but as he did so, it enabled Sowery to put his nose down the inside through Dingle Dell and the Lanan Racing man took 11th. That soon became 10th as he pulled off an unbelievable move around the outside of Double R Racing driver Chadwick at Paddock Hill.

Chadwick dropped a further two positions on the next lap, with Cane and Guilherme Samaia moving up to 11th and 12th, whilst Sowery produced a carbon copy of his move on Chadwick to sweep around the outside of Kenyan Jeremy Wahome at Paddock Hill to claim ninth.

The order remained unchanged up front but Fortec Motorsports’ Manuel Maldonado was a man on the move as he took 13th off Jamie Chadwick at Sheene whilst Sowery caught and passed Hillspeed with Cliff Dempsey Racing’s Chase Owen at Hawthorns. Sowery’s charged continued as he passed race two winner Krishnaraaj Mahadik at Druids for seventh, whilst Ismail got the better of Chadwick at Clark Curve for 14th.

The final two laps passed without incident and Ahmed came home to take his 10th win of the season and extend his championship lead to 106 points over James Pull. Das took second with the aforementioned Pull third.

Ahmed said: “I was pushing hard every lap as you have to be on it every lap. I was trying to get the fastest lap and be as consistent as possible. I tried to treat it like a qualifying session. It was a really good job by Carlin. Trevor (Carlin) has put together a really good team for BRDC British F3 this year and we’ve all got a really good team around us. I’d like to say a big thank you to Trevor for letting me drive his car this year and everyone who came down here to support me.”

The penultimate round of the 2017 BRDC British Formula 3 Championship takes place at Snetterton on 26/27 August. 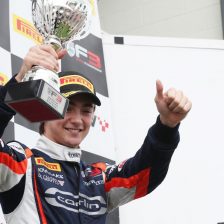 END_OF_DOCUMENT_TOKEN_TO_BE_REPLACED

Das returns to the podium...

Despite a challenging start to his weekend Cameron Das has once again shown grit and determination to secure another podium finish in the BRDC British...